Single Stage or Two Stage Stretch Blow Molding for PET Bottle Making:
Which One to Choice 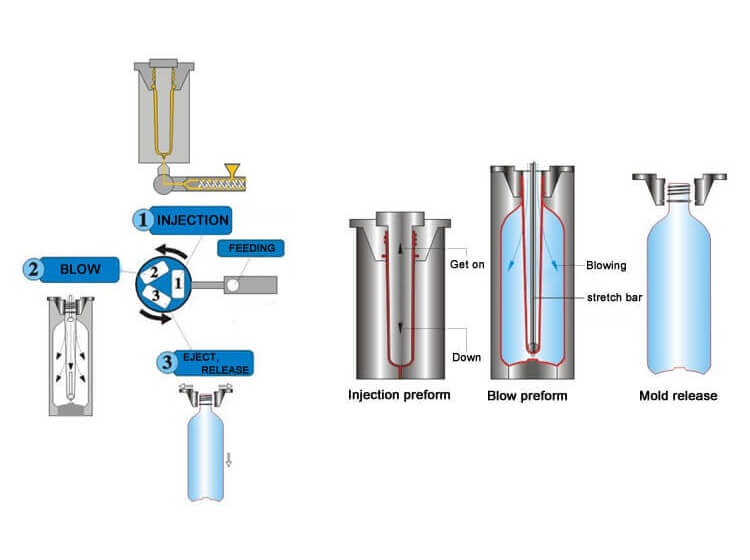 Stretch blow molding is actively involved in developing PET (short for polyethylene terephthalate) bottles, which are extensively used for water, juice, and a wide range of plastic packaging. Stretch blow molding has been employed since the early 1970s and has risen in popularity, with the principal use being the production of carbonated beverage bottles such as coca cola. One of the primary benefits of stretch blow molding is the potential to expand the preform both in axial and hoop directions. This transverse direction stretching of material improves the container's tensile strength, barrier characteristics, drop impact, and top load. With these benefits, it is normally possible to decrease the overall weight in a carrier by 10 to 15% less than when a container is produced in another way.

The extruder is used in a single-stage process to infuse a parison together into preform mold, in which material (plastic) is rapidly cooled to produce the preform. After that, the preform is re-heated and inserted in the container mold. Hot air is then pushed into the spaced parison, causing it to stretch to the shape of the bottle. When the bottle has cooled, the mold is opened, and the finalized bottle is removed from the mold cavity. This approach works best in different applications, like vast mouthed jars, when high manufacturing rates are not required. 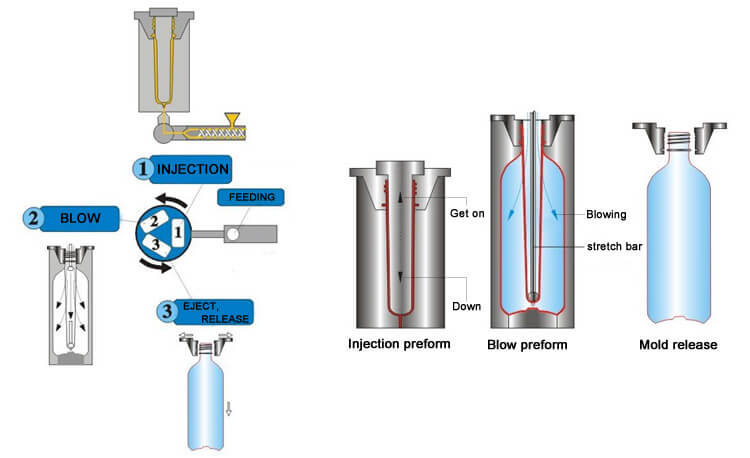 There are three stations on the machines: injection way to strengthen, stretch or blow, and product. The raw material is injected from the hopper into the injection screw; the plate spins preform to the blow/stretch blow terminal with its own heat, and with no heating up for blowing; the product then rotates to the release station and drops down; it is completely automated circulation working method.

Two machines are utilized in the two-stage injection extension blow molding procedure. The injection molding method and stretch blow molding machine are examples of these. In the first machine, the plastic is injected into a totally cooled preform before being delivered to the second device. The preform will typically include the bottle's neck including and its threads; also, it can be transferred to a third - party vendor before being inflated out using second machine. When they arrive, they are unscrambled, reheated with infrared light, and conditioned before molding. The "cold preform method" derives its name from the requirement to chill preform prior to actually reheating and stretching. 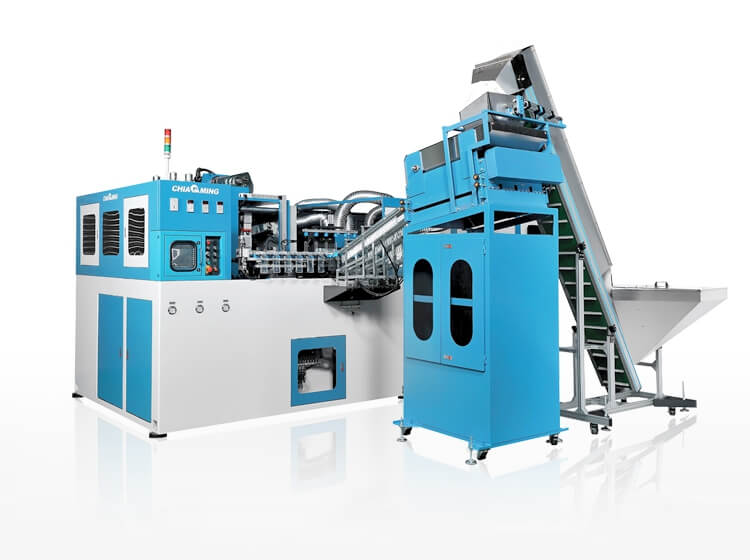 How Two-Stage Molding is better than One-Stage

Generally, blow molding processes are characterized by a number of stages involved in the process (i.e., single-stage and double-stage, etc.); the choice is usually based on the type of product/application. In this regard, it is important to know that the world consumed over 580 billion plastic bottles in 2021(Statista. com), out of which nearly 80% were utilized for beverages and commonly manufactured using the two-stage technology. Whereas, the remaining 15-20% were manufactured where either process is an option.

There are certain factors crucial for the process selection; these include tool prices, overall capital expenditure and the number of available performs, etc. The difference in capital costs involved in both the process can be explained by the fact that investing even in a four-cavity single-stage is not feasible with reference to volumes under 2 million/year, compared to investing in sourcing preforms for a two-cavity reheat machine. The figure of 2 million pieces/year is important since most custom applications are produced less than this number. In addition, the number of preforms for the two-stage reheat machine has significantly increased over the past decade, since preforms are much more cost-effective to ship globally than the bottles.

Moreover, other key determining factors include particulars of the application with reference to bottle features and economics. The single-stage is more suited where producing blemish-free, sturdy threaded and the oblong-shaped bottle is a priority, otherwise two-stage are preferred for optimum price economy. Furthermore, experts prefer single-stage process usually just for manufacturing custom bottle designs in limited numbers, where economies of scale could not be achieved.